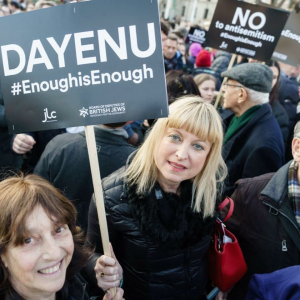 In my first three years I have stood up and:

✔ Campaigned fearlessly against antisemitism in the Labour Party, and beyond, including from far right-wing groups; working with other communa organisations, as well as non-Jewish groups

✔ Fought BDS and all attempts to delegitimise the state of Israel, alongside building diplomatic relationships to strengthen the Abraham Accords, e.g. our 2020 Chanukah lighting

✔ Played a constructive role in the national fight against political extremism, e.g. leading the charge to get Hizballah banned as a terrorist organisation

✔ Defended our burial rites against intransigent coroners, as well as stood up for our right to practice Brit Milah, Shechita and Kashrut in the face of mounting challenges

✔ Helped to spotlight and publicly challenge the shocking plight of the Uyghur Muslims in China, thereby ensuring that this has become an issue of national and international concern

In my next three years I will continue standing up and:

● Lead the Jewish community’s charge in the fight against racism and extremism, including campaigning for a regulated, zero-tolerance approach to hatred on social media

● Champion the rights of Jews and other minorities in the UK and beyond, including ensuring that the IHRA definition of antisemitism is adopted by British universities, councils and football clubs

Our fundamental Jewish traditions, from Milah to Shechita, are under an unprecedented attack.
Our community needs an advocate to stand up for our traditions and to defend our human rights.